Caravaggio’s The Supper at Emmaus features a snag in a wicker basket that mirrors an underground Christian emblem, writes Kelly Grovier.S

Sometimes a flaw isn’t a flaw at all but a flourish – a stroke of genius. Take, for example, the tiny fray in the weave of the wicker basket that teeters on the edge of the table at the centre of Michelangelo Merisi da Caravaggio’s early 17th-Century masterpiece The Supper at Emmaus, among the greatest treasures in the rich collection of the UK’s National Gallery. Though countless eyes have marvelled at the mysterious drama unfolding in the shadowy interior of the inn in which the recently resurrected Christ has just revealed his true identity to a pair of dumbstruck disciples, the significance of an almost imperceptible imperfection has gone unnoticed in the four centuries since the painting was commissioned by the Italian nobleman Ciriaco Mattei in 1601. A loose twig, sticking out from the plait of the woven fruit bowl, is a dainty defect from which the work’s truest meaning can be unravelled. Alone among the countless symbols that punctuate the religious painting, this delicately described detail – half in shade, half in light – transforms Caravaggio’s celebrated canvas from a mere illustration of scripture scene into something active and daring – a spiritual challenge whose stakes could not be higher.

To appreciate the full implications of this easily overlooked detail, it is worth reminding ourselves of the contours of the bigger picture Caravaggio is conjuring. The source for The Supper at Emmaus – a subject that has inspired everyone from Rembrandt to Velasquez, Pontormo to Cavarozzi – is the New Testament’s Gospel of Luke, which tells the story of Christ’s intimate repast with two of his disciples, Luke and Cleopas, who have failed to recognise him after his return from the dead. As the bread has already been broken and blessed, the time has come, according to the gospel’s account, for Christ to “open” the eyes of his followers and for him to vanish “out of their sight”. 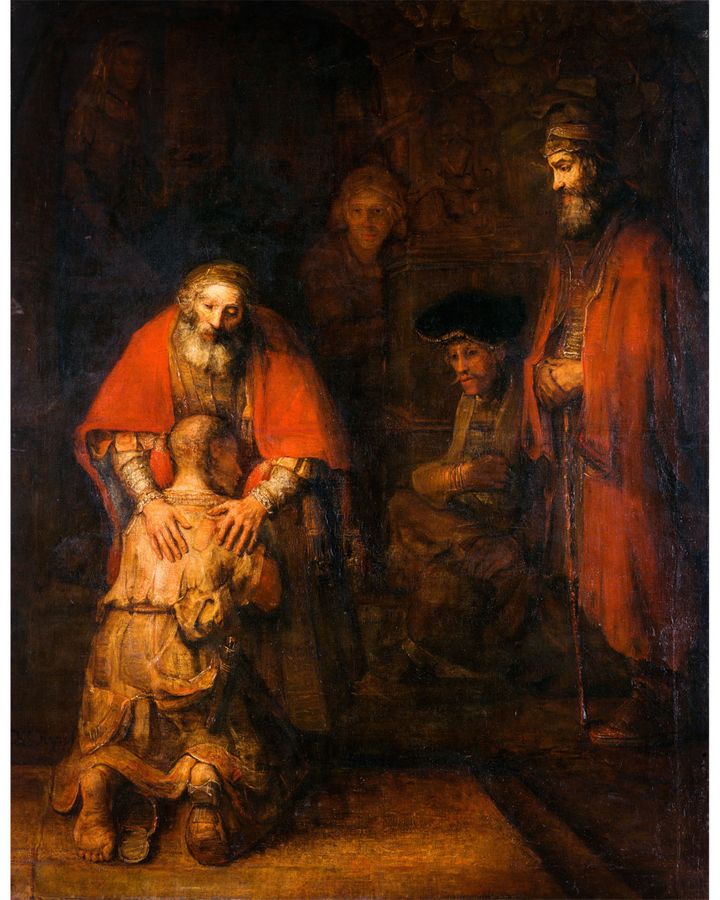 Many other painters depicted the scene described in the Gospel of Luke, including Rembrandt with The Return of the Prodigal Son (1668) (Credit: Alamy)

The painting, in other words, captures a mystical threshold, the millisecond before Christ, who is hauntingly haloed by a stranger’s shadow on the wall behind him, disappears from the world. In that immeasurable instant between revelation and evaporation, Caravaggio hatches a suspended, otherworldly world. To the left of the basket, Christ’s paternal uncle, Cleopas, pushes himself up from his chair in panicked astonishment at the disclosure – his sharp elbows poking through the worn-out sleeves of his coat. On the other side of the wicker bowl, to our right, Luke flings his arms out wide, mirroring the very posture on the cross into which Christ’s own limbs had been nailed at the time of his painful death. Meanwhile, the unfazed innkeeper, who stands beside Christ, gazes on uncomprehendingly – hearing the same words that Christ has uttered to his thunderstruck disciples, but unable to grasp their significance. 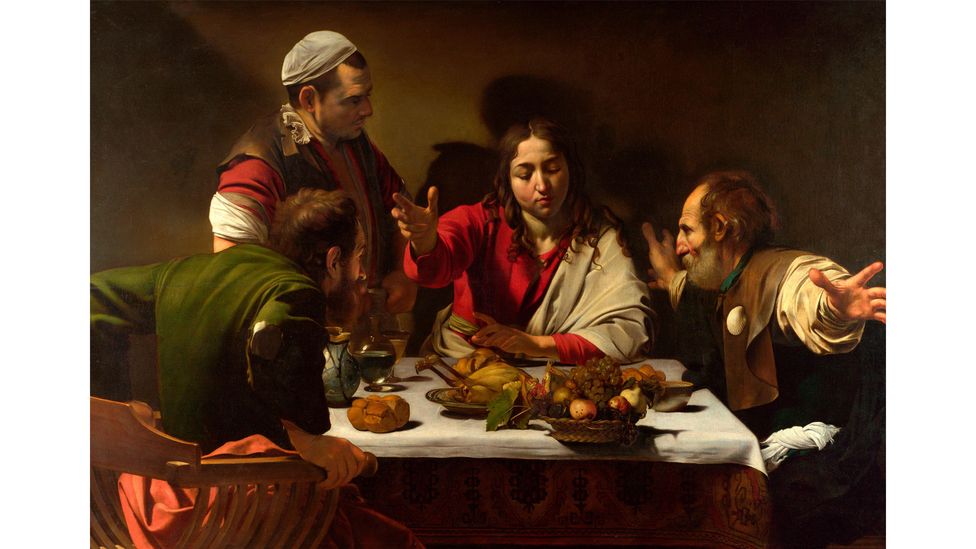 Caravaggio carefully composed The Supper at Emmaus to reflect the dynamics of the scene that it was depicting (Credit: Alamy)

Caravaggio must have been keenly aware in choreographing this extraordinary scene, poised as it is between our perishable realm and an eternal one that lies beyond, that the contrasting reactions of those present for the big reveal – the nonplussed innkeeper, on the one hand, and Christ’s stunned and speechless followers, on the other – were also those that his own painting had the power to elicit. It is one thing to illustrate a moment of revelation that others have experienced. It is quite another thing to make the observers of his work actually participate in the awe of that epiphany – to transform the canvas into the very stage on which a spiritual awakening is potentially and perpetually possible.

But how? “It is as if,” the art historian Andrew Graham Dixon mused in his searching biography of the artist, Caravaggio: A Life Sacred and Profane, while discussing this same work, “the painter has asked himself a series of direct, straightforward questions about the story that he was given to depict. What happens to the world when a miracle takes place? How might it be possible to tell, should the risen Christ suddenly come among us? What do things actually look like at such moments?” A master of light and darkness who wielded his brush like a magician’s wand, coaxing from chiaroscuro a semblance of tangible form, Caravaggio was as keenly aware as any artist has ever been that a painting has the potential to exceed the limitations of a static surface and become a platform for transcendence.

Enter the wicker fruit basket. This anything-but-still Still Life in Caravaggio’s painting is the key prop in his ingenious effort to reach out to us, to ensure our interest in the scene he is portraying is elevated beyond the passive into something urgent and active. With virtuoso Trompe-l’œil sculpting of substance and shadow that creates the illusion that the object is projecting out of the canvas, the artist has carefully situated the woven vessel on the very edge of the table.

The basket is a precarious nudge away from tumbling out of the painting altogether and into our space, spilling into reality its contents of bursting pomegranates and swollen grapes, rotting russets and radiant quince, which the artist has filled with ripeness to the core. But it’s the interruption in the weave of straw that subliminally snags the eye of the mind – a fray consisting of two intersecting curves that the artist describes with calculating care – one swerving upwards, the other down, to form the unexpected, if irrefutable, shape of a stylised fish, or “Ichthys” in the parlance of ancient Christian symbolism. 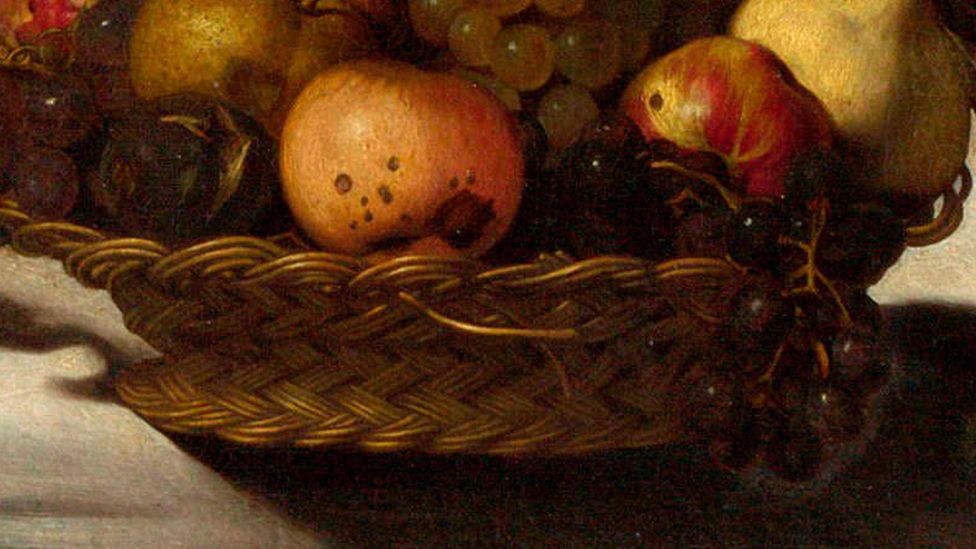 A stray piece of wicker sticking out from the basket appears to show an ancient Christian symbol (Credit: Alamy)

According to early ecclesiastical tradition, the Ichthys emblem, which dates back to the 2nd Century as a sign of Christian belief, was employed as a kind of secret handshake by followers who feared persecution from non-believers. To ensure that one was in the company of a fellow adherent of the church’s precepts, a semi-circular arch was traced on the ground. If that seemingly innocuous gesture was joined by a mirroring arch drawn by the stranger, thereby forming the crude outline of a fish, the silent ritual of acknowledging the dominion of Christ was considered reciprocated. 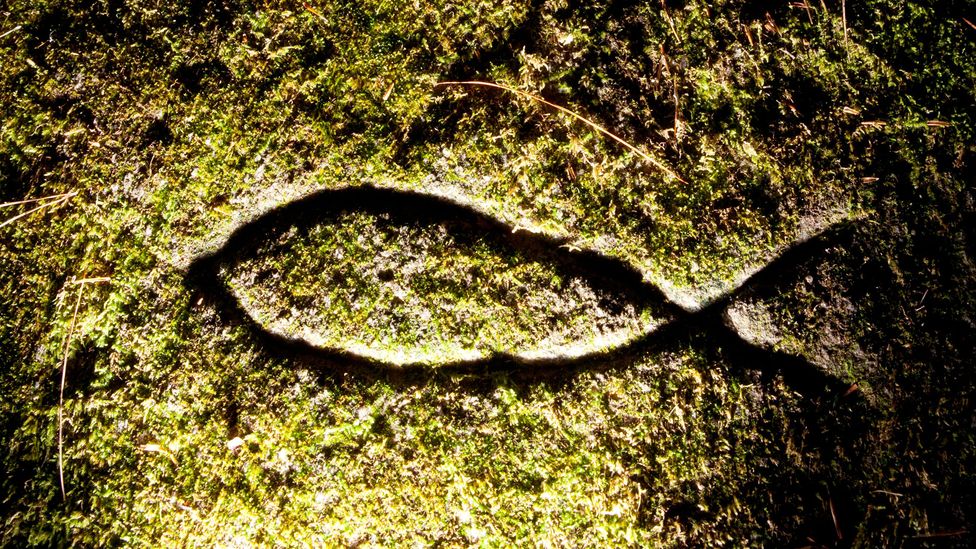 Made up of two intersecting arcs, the Ichthys symbol resembles the profile of a fish (Credit: Alamy)

The act, intended to help one acknowledge the presence of a Christian, is clearly relevant to a painting devoted to the very subject of spiritual recognition. By conscientiously accenting only a portion of the Ichthys outline by casting a sliver of light on one of the loose twigs while keeping the other, behind it, in relative shadow, Caravaggio approximates the rustic ritual of inscribing one half of the fish symbol. From there, an acceptance of the overture to recognise the miracle at hand is entirely up to the observer of his work. Whether we chose to receive the gesture is up to us.

Unconvinced that the artist intended to braid into his basket an encrypted Christian symbol? Look closely at the silhouette that the pile of fruit casts on to the shroud-like tablecloth to the right of the wicker bowl. There, an even more emphatic shape of a fish, with a sharp lunate tail fin forever flipping behind it, can be seen sailing headlong into the basket, pulling our gaze with it in its wake. 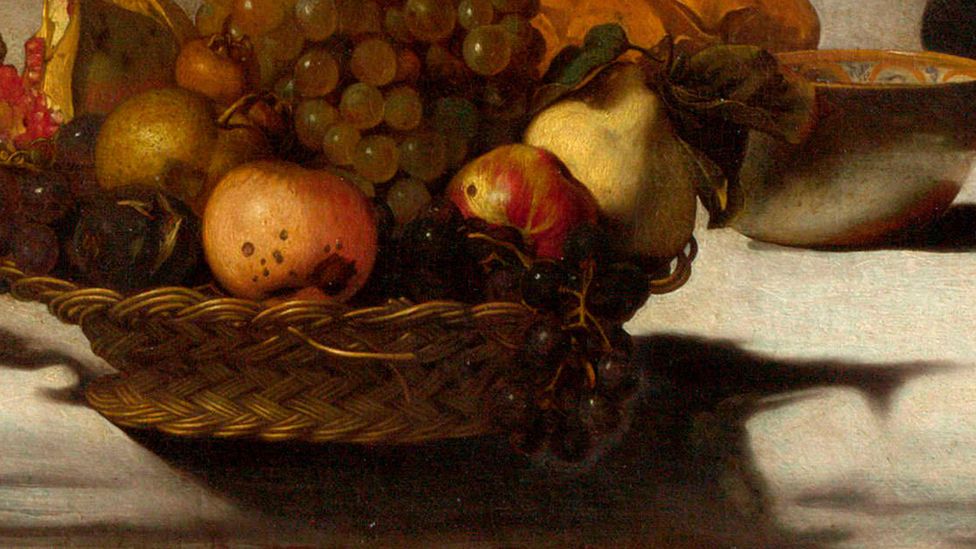 The shadow cast by the fruit seems to echo the tail of a fish (Credit: Alamy)

Nor is it the first time that Caravaggio found himself melting a shadowy still life into a display bursting with scaly surprises. Seven years before he painted The Supper at Emmaus, the artist created an edgily charming portrait of a young man recoiling from a reptile that has nipped his unsuspecting finger as he fiddles with the arrangement of flowers and fruit. It is as if Caravaggio, when he came to create The Supper at Emmaus half a decade later, has managed to contain and sublimate the unleashed intensity of Boy Bitten by a Lizard – a version of which is also in the National Gallery – and harness its energy into something spiritually subtler, expectant, and forever on the verge of snapping.

Five years after he completed The Supper at Emmaus, Caravaggio undertook the subject again for a version of the gospel story that now hangs in Pinacoteca di Brera in Milan. A much starker interpretation of the scene, whose shadows have thickened into an engulfing bleakness, this later canvas is far more sombrous in temperament than his initial vision. The basket of fruit, with its lyrical flourishes of unravelling wicker and finning shadows, has vanished entirely from the table. Rather than attempting to bridge the mystical world of the painting with ours, Caravaggio has begun instead to push us away and to seal us out from the dismal abyss into which he and his canvas seem to be sinking. No stranger to the darkness, which increasingly called to him in the stressful final years of his life – with routine run-ins with the law, homicidal brawls, and eventually his own mysterious death in 1610 under circumstances that remain murky to this day – Caravaggio seems less and less to have perceived his paintings as the mystical stages on which others can find their souls than a projection of the gathering gloom in which his own soul was shrouded.