Alejandro Flores Huatta was born on the 1,300-person island, which is located on the Peruvian side of Lake Titicaca, a three-hour boat ride from the nearest city of Puno. The 67-year-old learned how to knit the iconic chullo (a tall, floppy Andean hat) as a child, with his older brother and grandfather teaching him by using the thorns of a cactus as knitting needles.

“Most of the people learn by looking, watching. Because I don’t have a father, my older brother [and grandfather] taught me to knit. So by watching, I learned little by little,” he said, speaking through a Quechua translator. 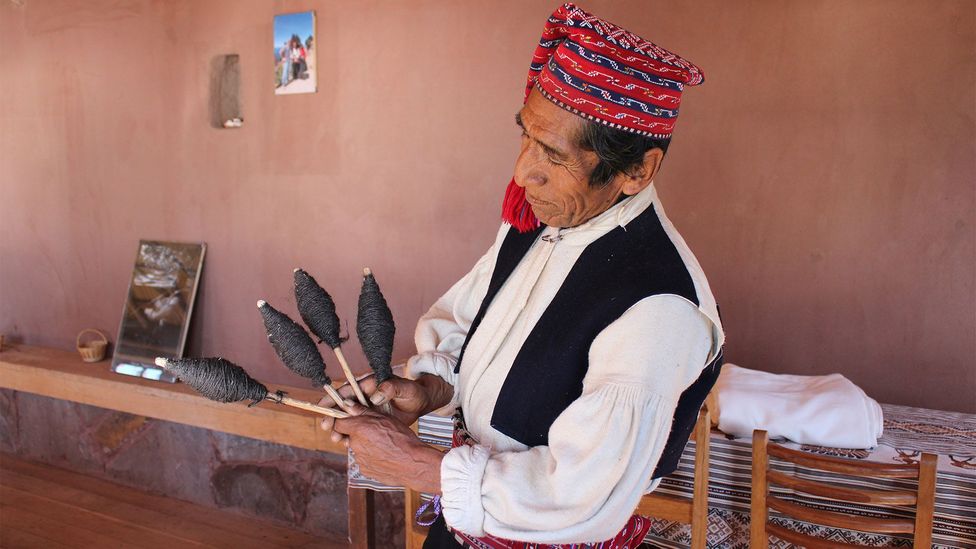 Like other males on the island, Alejandro learned how to knit from the men in his family as a child (Credit: Romel Velasquez)

Taquile is famous for its textiles and clothing, and while women weave and tend to the sheep that provide the wool, men are the ones who exclusively produce the island’s knitted hats. The chullos are seen as culturally significant, playing a key role in the island’s social structure and allowing men to show their creativity while also displaying their marital status, dreams and aspirations – some men even use it to show their mood. It’s a tradition that islanders are working hard to preserve.

Residents were relatively cut off from the mainland until the 1950s, and the island’s isolation has helped to keep its heritage and way of life intact. Locals abide by the Inca code of “Ama sua, ama llulla, ama qhilla“, (Quechua for, “Do not steal, do not lie, do not be lazy”). Taquileans are farmers traditionally; the six island communities take turns to rotate crops of potato, corn, beans and barley in terraces on the mountainsides. They raise sheep, guinea pigs, chickens and pigs on the land and fish in the lake. Tourism kicked off in the 1970s, giving locals a source of income with tens of thousands of visitors drawn to the island annually to tour the villages and surrounding lake. Visitors typically stay with locals in humble, family-run accommodations; lend a hand-harvesting crops; try local specialties like fried trout and potatoes with rice, beans and mint tea; and purchase the island’s famous handmade textiles.

In 2005, Taquile’s textile art was deemed so valuable that Unesco deemed it an Intangible Cultural Heritage of Humanity. Alejandro is one of the seven men on the island recognised as a Master of Textiles, along with the island’s president, Juan Quispe Huatta.

The tradition has been around for the better part of 500 years, with roots in the ancient civilisations of the Inca, Pukara and Colla peoples. The Inca in particular, used their headdresses in a similar way to the Taquilean chullo, to display the specific insignia of their particular province – but that’s where the similarities end. The Taquilean chullo and the Inca headdresses look vastly different. The elders of the island tell of the chullo design arriving with the Spanish conquest in 1535, and Alejandro’s grandfather passed on stories of the early conquerors wearing similar hats that were white with ear covers, “but not the same patterns or symbols,” Alejandro said. 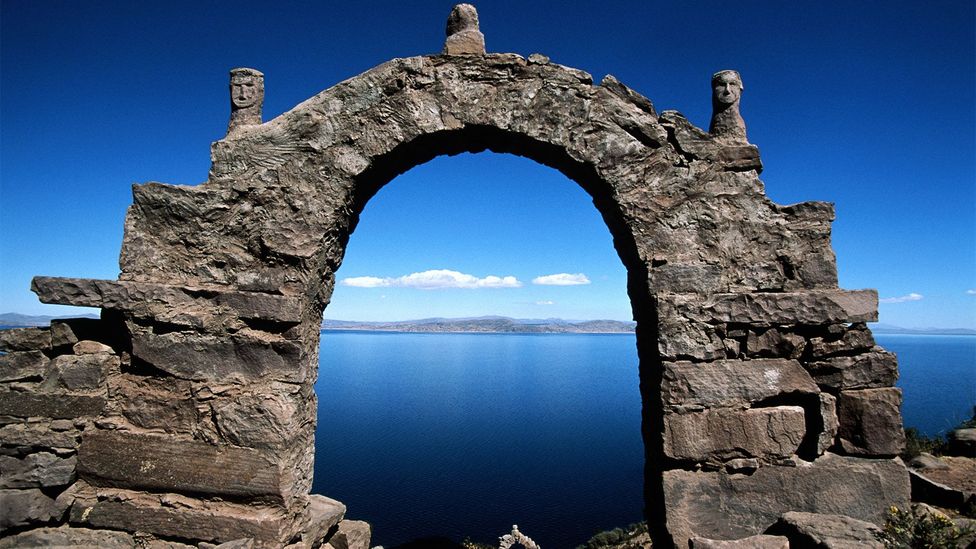 Taquilean boys are taught to knit from the age of five or six, with the skill passed down from one male to the next. The first chullo a boy knits is white, though he’ll later use sheep wool dyed with locally sourced plants and minerals, and the method is refined until he’s able to knit a hat that is tight and neat. It’s a painstakingly slow process – even the most experienced knitters on the island need the better part of a month to make a chullo due to the intricate patterns and specific iconography reflecting agricultural, seasonal and familial totems.

The chullos also play a key role in pairing young couples. Men are chosen by their mates based on their ability to successfully knit a chullo with tiny wire-thin needles. Nowadays, some men even use bicycle spokes. “We look for them because they are good to knit [with]. They are thin and they don’t break easily,” Alejandro said.

According to Alejandro, the sign of good partner is one who can make a pin-tight chullo – one knitted so well that it is able to hold water over large distances when turned upside down. Would-be fathers-in-law often test the chullos of their daughters’ potential husbands in this way. Alejandro proudly explained that his chullo could hold water for up to 30m without losing a single drop, and was impressive enough to attract his wife, Teodosia Marca Willy, 44 years ago.

“She saw good skills apparently in my chullo. I used to make a really good hat; I was a good knitter,” he said. 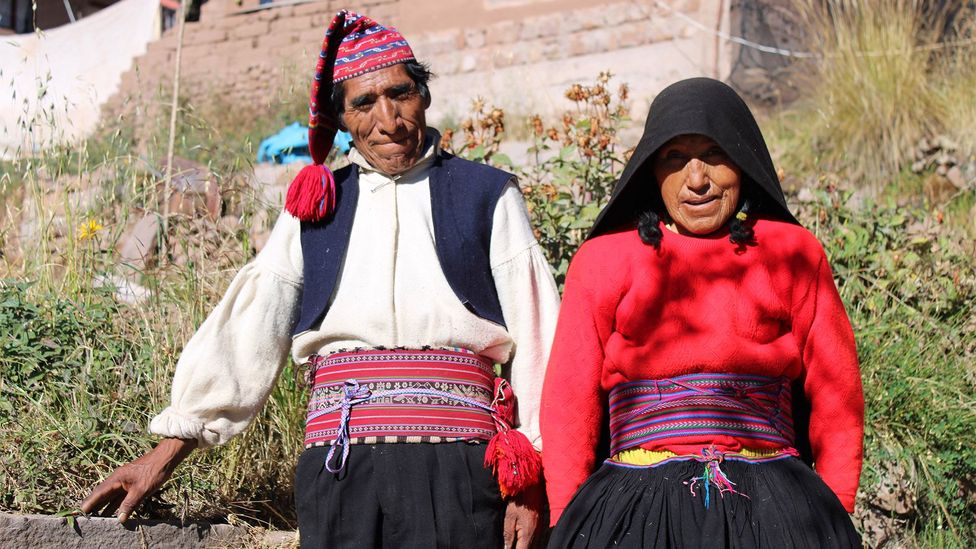 Alejandro’s pin-tight chullo attracted Teodosia 44 years ago and they’ve been married ever since (Credit: Romel Velasquez)

While each chullo is as individual as the man who knits it, the iconography and colours are often repeated. There’s the six-petaled rose (a nod to the island’s six communities); birds like the cattle egret and the condor; and animals like the sheep. Agricultural symbols also feature heavily, as locals rely on native plants and flowers to dictate when is the best time to plant seeds or to rotate their crops of potato, quinoa or corn. Red wool represents ancient bloodshed, while blue is an homage to Mama Cocha – the surrounding lake that provides their community with sustenance.

While the grooms knit the hats themselves, their pintay or colourful red “marriage” chullos are presented to them on their wedding day by their godfathers as a kind of initiation into adulthood.

“A man who knits a really good chullo, [only then] can he be called a man,” Alejandro said.

The chullos continue to change throughout a man’s life, depending on his status. New chullos are made when a man is married or divorced or when his standing on the island hierarchy changes. “Later when this person becomes an important person, a leader, an authority, and he’s considered an elder… we need to change our chullo, wear a different one,” Juan said. 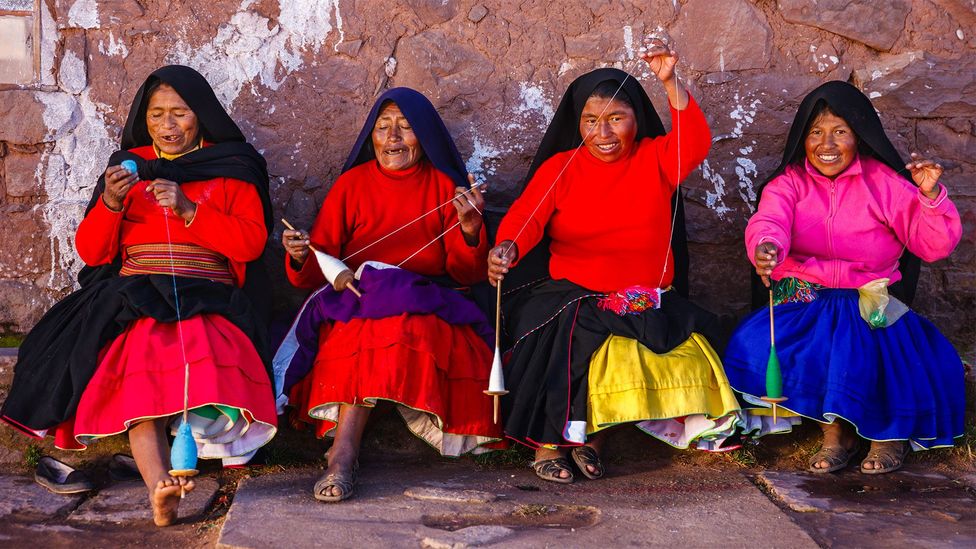 While the men knit, it’s the women who weave the colourful chumpis, the belt that is presented to their groom on their wedding day. The process is deeply personal, with a woman’s hair woven into the belt, on its inner layer. When a young man is single, the hair inside his chumpi belongs to his mother. Once he is married, the hair used belongs to his wife. The illustrations on the belts often mirror the chullos and are specific to each family and region of the island; the different communities of Taquile often feature in the form of a flower, the two-headed snake (an omen foreshadowing a death in the family) and the yellow careewa signifying it’s time to plant seeds.

The chumpis are often referred to as “calendar belts”, with 12 panels to represent the 12 months of the year. “Our iconography has been always the same. They are unique in the world. They come from our ancestors,” said Juan. “When [we] see [a] friend, we pay attention to his belt. Just by seeing his belt… we can know what plans he has. We can read just by watching the iconography and the colours.”

“If the girl is a really good weaver, then you will see lots of symbols and patterns in the chumpi,” added Alejandro. “They can tell the whole story in the belt.” 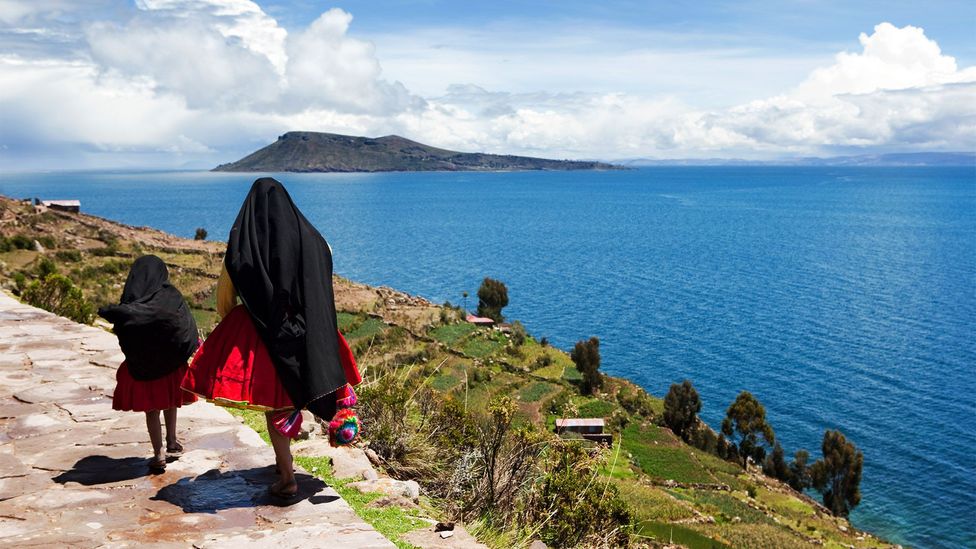 Just as men pass on their knitting knowledge to their sons, women on Taquile teach their daughters to make belts (Credit: djgunner/Getty Images)

The Taquilean women pass this skill on to their daughters, and granddaughters, Teodosia explained. The belts also serve a functional purpose, acting as a back support for the manual labour involved in the sowing and farming of crops and shearing of sheep.

Taquilean culture is rather progressive, with Alejandro and his wife both considered authorities on the island, sharing decision-making responsibilities.

“We both are in charge, we always work together, we take decisions together,” Teodosia said. “A single man cannot be a leader alone. He always needs his wife. In ancient times it was [also] like that.”

While the island was long cut off from civilisation, it has not been spared by Covid-19. The island was completely closed to visitors for 12 months, robbing locals of their main source of income and forcing them to rely on their farming heritage to survive. Ironically, the pandemic’s effects have already made their way into the chullos that the island’s younger generations are creating, with Juan explaining that a young boy recently knitted the image of a circle with the coronavirus’ huge tentacles. 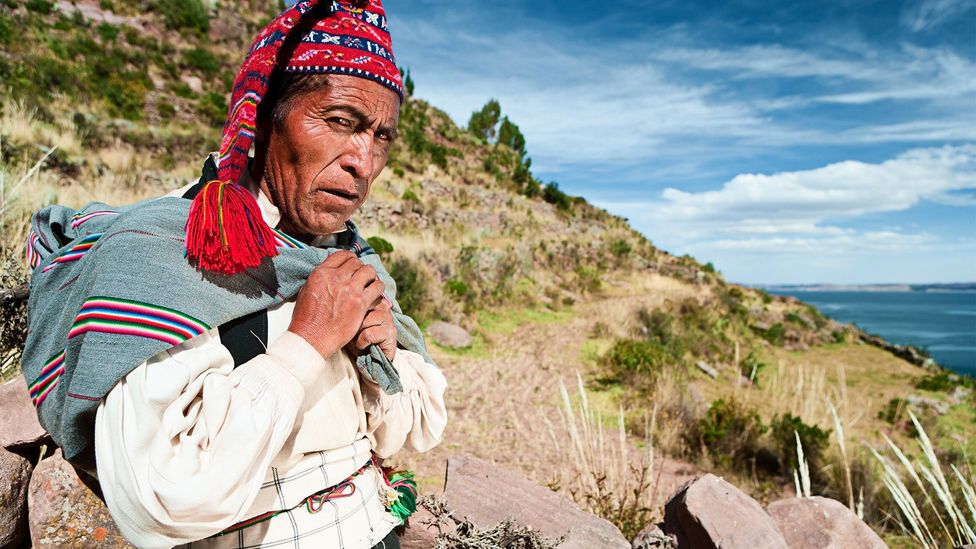 For nearly 500 years, men on Taquile have used hats as a way to express themselves and attract females (Credit: hadynyah/Getty Images)

For Alejandro, Juan and the other knitting men of Taquile, the recent changes they’ve witnessed make preserving their culture and traditions even more important, especially as their native dialect of the Quechua language isn’t written. Both men have already passed their knitting skills on to their sons.

“We have lots of knowledge from our ancestors, and I need to help [younger generations] understand that that must be always in our minds, in our consciousness, because that’s knowledge and wisdom that must not be lost or forgotten, never,” Juan said. “If modern times are coming, we need to accept it, but without forgetting our background.”